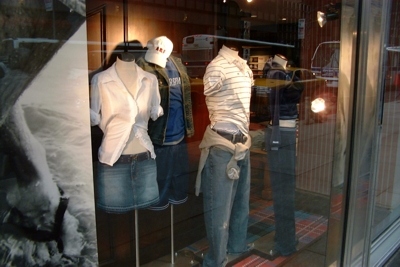 In 1999, I was starting my career in retailing.

Even though I was very young, I was managing a couple of retail stores my family owned.

I was trying to get new ideas to make a transformation in the business. The market we were operating was declining. Clients were moving to other kind of clothing stores, so there was an urgent need for change.

Anyway, my father told me USA was the place to find new ideas to that kind of retail stores. At that time, that looked like a weird idea. Fashion was, for me and for most of retailers, ruled by France and Italy.

So, me and my wife, went to visit New York.

And it was true. New York retail shops were very different from European shops. I was enjoying New York and learning a lot.

One day, we went to South Street Seaport, an historic area in New York. In the 90’s, that area was visited a lot by tourists and locals. And there were some nice stores over there.

So, after visiting many stores, we found one shop that looked nothing special. From the outside, it was a normal store. Nothing special about it. But when we went in….

But at the same time it was so appealing, that we couldn’t resist.

Also the products were fabulous, with little details of luxury brands. I never saw, until that day, those details in teen clothes.

As some of you may already guessed, this store was Abercrombie and Fitch.

Today, this may seem a not so special idea, selling clothes to teens with a classic and luxury touch. But believe me, in 1999, it was so advanced.

In the following years, Abercrombie and Fitch, become one of the most successful retailers in the world. Unfortunately, in recent years they lost that success. But for us, working in retail, we should admire and study what made Abercrombie so successful in the beginning.

This story reminds me of a recent event.

I was doing interviews for hiring one person for our decoration department. One young man, was trying to convince me he had found the solution to our store decoration problems. He had been in the store for a few minutes, but he already knew everything.

He said we needed a very modern decoration, because t-shirts (we sell mainly t-shirts) are a modern product for young people, and young people want modern things.

That made me remind the first time I saw Abercrombie and said: Wow!

There are no fixed rules in retail.

The best we can do is create a system to work on hypothesis and create our own rules.

It’s like Tesla and electric cars. Everyone making electric cars, were making cars for people who worried about the environment and wanted to save money. Elon Musk, thought different. Why not make a fast electric car for people with lots of money. And it worked.

So, being different can be much better than being better.

How this store made me say: Wow!